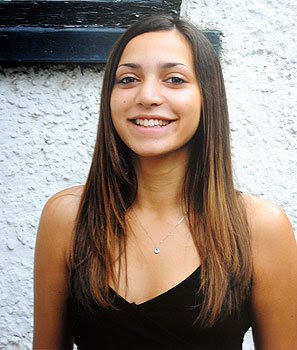 It has been reported that Stephanie Kercher has sent out a message asking if people would be willing to use this picture of her sister Meredith as their profile picture on social media sites during this time to help balance the news coverage so that Meredith is not forgotten.

The truth is Meredith Kercher has not been forgotten. In fact her name has remained in the news for the past 4 years for very unfortunate reasons. If the murder investigation had been handled properly, her killer, Rudy Guede, would have been in custody very early on and the world may  have never heard of Meredith Kercher. Meredith  has received a great deal of attention in the news, for a long period of time, because Amanda Knox and Raffaele Sollecito were wrongfully convicted for her murder.

On October 3, 2011, Judge Hellmann spoke loud and clear when he declared that Amanda Knox and Raffaele Sollecito are innocent. They had absolutely nothing to do with Meredith Kercher's murder. In the case of the murder (and the sexual assault, transporting the knife, and theft), Amanda and Raffaele were acquitted "for not having committed the act." With regard to the charge of staging a burglary, Amanda and Raffaele were acquitted "because the act does not exist." Hellmann's court ruled that the burglary was not staged. The nightmare for Amanda and Raffaele has finally ended. This is a major news story and it is expected that the coverage would be enormous. This coverage is in no way disrespectful to Meredith Kercher.

The only person that has been forgotten in this case is Rudy Guede. His name has been almost completely ignored by the media. The media acts as if Guede doesn’t even exist. Rudy Guede attacked and killed Meredith Kercher. Guede has been convicted for the crime and his conviction has been confirmed (finalized) by the Italian Supreme Court. Why is he being ignored?

Unlike Amanda and Raffaele, Guede was arrested after the evidence collected at the crime scene was analyzed and that evidence points right to him—no one else, just him. There was no rush to judgment when it came to arresting Rudy Guede. Investigators found Guede’s hand print on a pillow case found under the victim’s body. The fingerprints led them to their suspect. When police came looking for Guede, he had already fled to Germany. Thankfully, old fashioned police work nabbed Guede; he was stopped in Germany trying to board a train without a ticket and was immediately extradited back to Italy.

Guede also had a history of break-ins similar to that seen at the cottage. One week prior to the murder of Meredith Kercher, Rudy Guede was caught breaking into a nursery school by the school's owner, Maria Del Prato, when she arrived unexpectedly during off hours with two repairmen. Del Prato along with the repairmen kept Guede at the nursery and called the police.

When police searched Guede's backpack they found a laptop and cell phone that had recently been stolen from a Perugian law office. The break-in at the law office was very similar to the break-in at the cottage as Guede entered through an elevated window broken with a rock in both occasions. In the nursery school break-in, Guede was found in the possession of a large knife said to be stolen from the school’s kitchen. He was also  in possession of a woman’s gold watch which tied him to another break-in occurring 4 days earlier. Guede's break-in at the nursery no doubt made him a suspect in a previous burglary of the nursery in which cash had been stolen.

In the month prior to Meredith Kercher's murder, Guede had gone on a crime spree. This activity was no secret to the police yet they never managed to properly investigate Guede and never took him into custody. Why? The sad reality is, if the police had done their job properly Meredith Kercher would still be alive today and Amanda Knox and Raffaele Sollecito would have never been wrongfully convicted. They failed once again to take Guede into custody in a timely fashion after the murder leading to the pursuit of two innocent people.

In the case of Meredith Kercher, nothing can ever make it right. Her life was stolen from her in an act of senseless violence. Her family will forever be left with the sorrow of her loss and no real closure will ever come. I realize this is a blunt assessment but it is based on the reality of knowing how strong a parent's love is for their children.

I cannot imagine the pain felt by Meredith’s family to have this ordeal dragged out for as long as it has. I am hopeful that the Kerchers will eventually find answers to their questions about Meredith's death by taking a closer look at Rudy Guede.

I think Merrith's family has a real problem, they lost their sister, daughter cousin and they don't want Amanda to have a life. Why can't they along with police stop destroying this young exchange student Amanda Knox's life. They have the killer in jail with all the evidence that confirms him being the killer. Why does there have to be another killer for these people? Most rape, murders robberies are committed by one person, why should this case be any different. God will judge Merrith's family for keeping pressure on police to go after innocent young people and destroy their life because they lost their daughter, sister. for what they are doing to Amanda Knox and Amanda's family and Raffelle and his family. They have already paid a price too big , leave them alone.