It's time to let them go! Amanda Knox and Raffaele Sollecito have played by the Italian Rules 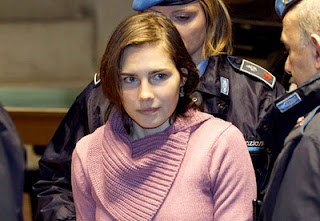 In November of 2007 the 21 year old English student Meredith Kercher was brutally murdered and sexually assaulted in her apartment room in Perugia, Italy by a young, inexperienced burglar, Rudy Guede, whom the cops had already begun to know, but for unknown reasons had never arrested. A shocking crime to her family, her friends, the town of Perugia, and over time many who learned of it throughout the world. Perugia with a university population of 40,000 students had a lot to lose by an unsolved murder of a female student, and many families had their children pack and leave within days. Like many violent crimes that occur in most towns or cities, the authorities set out to do their jobs and find some level of justice. The grieving Kercher family so conflicted in their emotions and highly distracted by the senselessness of such a horrible murder trusted that the Italian authorities would search for the truth and solve the crime with professionalism & integrity. Unfortunately, the many usual assumptions made by good people all over the world turned out to be very wrong, and the authorities fabricated a case within four days to include roommate Amanda Knox & her boyfriend Raffaele Sollecito. They announced the entire crime solved, despite having no forensic evidence, and as expected the students decided to stay and the police were seen as heroes.


Meredith Kercher's father was a tabloid writer for the English press and as such had many friends in the often-criticized business, who felt an immense loyalty to help out the stricken writer in virtually any way they could. The local Perugia & Roman authorities saw a nightmare coming and were also facing many personal issues that were now worsening, unless they took some major shortcuts and quickly solved the crime.

What happened next was a sick perversion of the truth and justice, of a proportion rarely seen in modern times.

Not only did the authorities make many errors, mistakes and manipulations to improperly blame an entirely innocent roommate, American Amanda Knox and her recent Italian boyfriend, Raffaele Sollecito, they spread their fabrication with the world using a hungry press, looking to help out their fellow colleague, using every dirty trick in their books. As the perversity spread, and many simply bought it because after all we are all trained to trust the authorities, the evil functioning of an uncaring press spread the perversity, proud to help their friend, regardless of the monumental destruction they were all inflicting on an innocent young woman, her boyfriend and all of their families & friends.

These fabricated efforts of providing evidence of guilt included the attempted use of an alleged knife handled by Amanda at Raffaele’s apartment that the DNA test fail to show how it has any connection to the crime, the alleged presence of an extremely tiny amount of Raffaele's DNA on the victim’s bra clasp that independent experts say is wrong and/or from contamination, a heroin user was the only sort of eye- witness who claims Amanda & Raffaele were not in Raffaele's apartment as claimed all night, and he saw busses that did not run the night of the murder, a very wrong time of death confirmed by failure of recently eaten food to digest, and a really pathetic unscientific claim that when they found Amanda's expected DNA in her own bathroom, in a few samples it was really her blood mixed with Meredith's. The "mixed blood" argument was shown by forensic experts to be essentially such a joke of an argument, but it demonstrates how desperate people will lie for sick reasons. We all leave DNA in our bathrooms and no tests show Amanda's DNA to be from blood where it was found mixed with Meredith's blood, such that assuming that or saying that it is despite the clear lack of proof is really disgusting and purposely meant to harm Amanda for no reason whatsoever. They also attempted to argue that the commonly found false positive Luminol tests made from a few footprints shows evidence they were made of blood until it was learned, dispute efforts to hide the information, that the footprints were absolutely negative with a second and equally sensitive test TMB, ruling them out as being made by blood. No specific test ever proved they were made from blood and those in the forensic field know how common false positive Luminol results are from many household chemicals and common cleaning products that include bleach or other similar materials. And one more major blunder among many others put forth by the cops & prosecutors was the arrival time of the postal police that they used to argue Raffaele called for police after their arrival. This was shown to be pure fabrication by the police. These are all very common matters we attorneys are very familiar with and make certain the improper and wrongful prosecution that the authorities and press tried to fool the public and jury with, just so they could have their way, regardless of the enormous consequences.

There are so many other examples of misconduct in the prosecution of Amanda Knox & Raffaele Sollecito, and yet finally this year members of the Italian congress have demanded that the improper conduct be investigated, as the reputation of democratic Italy had suffered significantly. There is also no doubt the authorities continue to try and cover their tracks or sue anyone who voices disapproval. We have recently learned that they tried to fool Raffaele Sollecito's sister in a letter sent to her, and we still await Milan's response to lawful discovery requests for information they have on Rudy's conduct there. And perhaps one of the ongoing major insults is the conduct of civil attorney Maresca who attacks the independent experts who were selected by the presiding Judge of the Appeal. There is a time to shut-up, and he has never learned the meaning. There are dozens more examples of inept prosecution and made up crap, but they have all failed, they purposely tried to hide evidence of innocence, made up lies, and they did so miserably. It's now obvious why!

The many errors, mistakes and manipulation by the authorities have now all been completely discovered and proven, with perhaps the exception of testing presumed semen stains found under Meredith's hips (outrageously neglected) and ruling out if anyone truly helped Rudy commit the crime. However Amanda Knox & her friend Raffaele Sollecito remain wrongfully convicted and in prison for almost 4 years. And while all indications appear to suggest that a very smart Appeals Judge gets it, and an innocence verdict will be announced this month, a few questions remain.

Will John Kercher and his family ever see & understand why and how they were so misled, why they were made to believe in a wrongful conviction with the total lack of any credible evidence, and how the local Italian authorities along with the friendly devoted media, helped a colleague press member, for many selfish, greedy and disgusting reasons. They all lied to the world, simply because they thought they could. As the dust clears, and truth along with Justice prevails many frustrating experiences persist. And the world continues to look at John Kercher & his family and ask in all sincerity, do you now finally understand the truth, the truth that brings true justice for Meredith Kercher? In my opinion it will take a major break through for many to understand that their alleged Italian attorney, Mr. Maresca and the prosecution are betraying the Kercher’s trust, and not seeking justice. And finally, whether for money, greed, career growth or perversion, will those who perpetrated this gross injustice ever be held accountable?

Since the initial guilty verdict in December of 2009, Amanda Knox & Raffaele Sollecito have remained in prison, presenting their appeals, and doing all they can, the Italian way, to obtain their freedom. Italian law says that all persons are innocent until proven guilty by competent proof/evidence beyond a reasonable doubt. They have no evidence Amanda Knox and/or Raffaele Sollecito were anywhere other than Raffaele's apartment, as both claim. They left no forensic evidence at the crime scene, no DNA in the murder room, nothing, absolutely nothing. No witness saw them do anything to harm or contribute to killing poor Meredith Kercher. They simply have no proof of guilt whatsoever. It is time to set them free, they are innocent!

Posted by Bruce Fischer at 8:53 PM