Steve Moore was faced with a major decision last September when Pepperdine University gave him an ultimatum: stop advocating for Amanda Knox or face termination.  Recently retired from the FBI, Steve was hired by Pepperdine University as the Deputy Director of Public Safety, a perfect fit for Steve, making several improvements to campus security in his short time on the job, receiving good performance reviews. Steve was fired when he refused to comply with Pepperdine's ill-planned ultimatum.

Steve's change of course began when he accepted a challenge from his wife Michelle regarding the Amanda Knox case. Michelle had watched a 48 Hours Mystery program about the case that convinced her Amanda had been railroaded. Steve spent 25 years putting bad guys in prison so it would take a lot more than a television show to convince him of a person's guilt or innocence. Knowing her husband well, Michelle challenged Steve to investigate the case and prove her wrong. Steve took his wife's challenge, conducted a thorough investigation, and to his surprise, he too concluded that Amanda Knox was innocent.

I met Steve and Michelle shortly after "the challenge" when I was notified that a woman had posted a comment on facebook that her husband, a retired FBI Agent, believed Amanda was innocent.  I contacted Michelle to see if her husband had interest in getting more actively involved. Steve felt compelled to help, writing a series of articles discussing his findings for Injustice in Perugia. 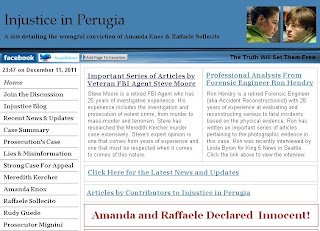 Steve explained why he felt he had an obligation to help Amanda Knox:

"I could not see this injustice and do nothing, any more than a doctor could see a person collapse and fail to render assistance, or a fireman hear the cries of children inside a burning house and stand idly by"

Steve's expert opinion would not go unnoticed leading to interviews with every major network in America. This didn’t sit well with an online hate group, led by Peggy Ganong and Peter Quennell, congregating for no reason other than to attack Amanda Knox. One member of the group, SomeAlibi, vowed to "take down" Steve Moore for simply believing Amanda was innocent, and the group encouraged all of their followers to write letters to Pepperdine in an attempt to get Steve fired.

We have several instances confirmed of this hate group contacting employers of those supporting Amanda Knox in an effort to harm them. The group also trolls facebook accounts of Amanda's supporters, even viewing accounts of their children. This behavior is not surprising coming from a group led by Peter Quennell, a known stalker who relentlessly harassed a young woman until she found the courage to go to the authorities. His continued activities show that he clearly has not learned his lesson and he may soon find himself with serious legal problems. Quennell has repeatedly accused me of libel, knowing full well that everything I print is backed by facts. If Quennell ever retains a lawyer instead of falsely claiming to have representation, maybe he will file a lawsuit. Of course we all know that will never happen because he has no case.

His partner in hate, Peggy Ganong fully supports Quennell and, by her own admission, has stalking tendencies of her own. She actually drove by Amanda's parent's home to count their shrubs, apparently in an attempt to accuse the family of misusing funds donated to Amanda; all nonsense of course. She has a continued obsession with me even using my name in her avatar on her hate site, asking when she will see me. I am sure her and her gang would like nothing more than to contact my employer and harass my family as they have done time and time again but I think I will take a pass for now.

We don't know for sure if the hate campaign against Steve Moore by the Quennell-Ganong cult influenced Pepperdine's decision but they celebrated his firing as if they had achieved great success. Their celebration was premature as Steve Moore has now been compensated for his wrongful termination. Steve filed a lawsuit shortly after he was fired; the preliminary judge reviewed the case and determined his complaint was valid, setting the trial date for August. Pepperdine moved for summary judgment, which was denied. It looks like Pepperdine had no interest in seeing the inside of a courtroom, offering a settlement instead. Steve discussed the settlement on his blog:

"I am happy to announce that Pepperdine and I have reached a satisfactory settlement of the lawsuit.  As a stipulation requested by Pepperdine, I have agreed to keep the terms of the settlement confidential.  But I can can tell you that Michelle and I are happy with the settlement and we feel very much vindicated! I would like to thank the university for doing the right thing at this juncture. With the stress of that ordeal over, the family has plans to vacation in Maui later this summer."

I have great respect for Steve and Michelle Moore and I am very pleased that Pepperdine has chosen to do what is right in this case. Steve and Michelle have sacrificed greatly for a cause they believe in and I am honored to call them friends. I am proud to stand with them on the side of truth as we watch the evidence against Amanda Knox being completely demolished on appeal.

Posted by Bruce Fischer at 2:16 PM

I really like Steve on the crime show, I like his Humor.yes lots of respect 4 him & his wife

I do love him too, his demeanor makes you forget you're watching actual crime. Must be an awsome husband and father🙏🏼